I sat in my classroom working on the boards – big cork covered things miles wide and tall, to be decorated for the inspiration and amusement of the students. The rain poured down outside, and I propped open one of the windows so as to listen to the sounds of the city. The air conditioning unit was off, letting my fully hear the steady cascade of water on the balcony tiles and glass doors. I kept glancing at my watch, checking the time routinely, noting each minute as it passed. I needn’t have bothered, as Simone must have been doing the same, for at 9:50 she tip-tapped into my room, asking if I wanted to check out the activity downstairs.

A few days earlier an email had been sent out to all faculty and staff at AIS, inviting us to take part in the Satyanarayan puja on the last day of July starting around ten in the morning. Pujas (pooh-jah) are both ritual and celebratory, an offering of prayers to a god or gods, in honor of a day, a moon, a life or death. Satyanarayan puja, as it was explained to me, is most often observed to dedicate new beginnings, such as getting a new job or starting a new school year, as we would be doing today.  Simone and I took the lift down to the ground floor, then stood awkwardly outside the doors to the Art Studio. Inside several of the grounds staff were arranging cushions, stools, and a mat around a small platform shrine. Two large and colorful rugs has be brought down from the fifth floor and placed on either side of the room, creating an aisle down the center. Aditya, the CEO of AIS, saw us outside, and excused himself. Explaining to us with a patient voice, he said the puja had not yet started, and they probably wouldn’t begin until ten-thirty or so, and we were more than welcome to join then.

We headed back upstairs, laughing a little that the puja was running late, understanding that clearly Indian Standard (Stretchable) Time also applies to religious practices. Back in my room, the rain continued to fall, and I continued to work. I taped down posterboard, creating large paper canvases across the shiny black lab tables. Collecting paints, pencils and brushes from the art room, I started to sketch out my ideas. This year’s lens (the focusing theme) is Fusion, and I was excited to create a board illuminating all the ways science melds with the rest of the disciplines, interweaving notions of invention and art as a single idea. Words like symbiosis, bond, and mixture would surround the edge, while the rest of the board, covered in blues and greens, would depict a scene of biomimicry: kingfisher beaked trains, calla lily water pumps, and water collectors inspired by desert beetles. The acrylics flowed over the paper, blending and bleeding when touched with water, brightly anchored to the fibrous cardstock when applied thick and dry. Time warped in the way of relativity, speeding as I went absolutely nowhere in the world and everywhere in my mind. Particularly I thought of my mom and grandma, of their talent with paints – one with oils, the other with watercolours – and how somehow I found myself in India using the plastics-based medium in between to create what my imagination describes best. Time slipped past as I painted, each blank poster a new beginning. 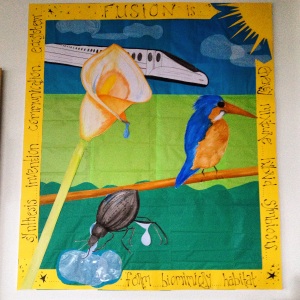 The hour rushed by unnoticed, and when I checked in with Simone again she informed me that though almost eleven, the puja has not yet begun. The priest had not arrived, and anyway, he would need “settling in time” as our colleague Paulami explained. There was no rush, no rush, Paulami repeated with a head wag. In fact, there rarely is a rush here in Mumbai, though it might feel like it for the speed at which the cars drive and rickshaws maneuver through gridlocked traffic. Or maybe it is not so much the absence of haste as the abundance of acceptable (and predictable) obstacles. Here in Mumbai there is a wealth of understanding that life happens and is complicated and slow in a city of thirteen million people. 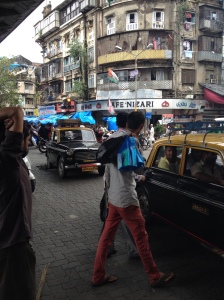 The next hour (plus a little) passed the same way – painting, planning, running up and down the stairs to check on the puja – until finally around eleven-twenty-five we ventured down to find the floor outside the art studio covered with dress shoes and sandals, chanting and bell ringing sneaking through the doors every time someone came or went from the room. Inside the two rugs were filling up with staff and faculty, as well as other members of Aditya’s family. In the front of the room, off to the right hand side, sat Aditya and his wife, Disha, cross legged on the cushions placed just-so before the ceremony began. Disha’s fashionable magenta and sherbert orange sari wrapped around her, contrasting sharply, but not surprisingly, with Aditya’s business slacks and blue button down. He could have been anywhere; she nowhere but here.

As we sat, unintentionally organized into women on one side, men on the other, co-workers whispered explanations into my right ear, as I listened to the chanting with my left. The priest, dressed in white tunic and lungi, sang the Satyanarayana Katha, stories of the life, power, and glory of Lord Vishnu. Aditya and Disha held their hands in prayer near their lips, mouths moving with words I couldn’t hear or understand. They made circumambulations wherein their left side was not to be presented to the diety, and at one point Aditya prostrated himself fully – forehead, nose, chin, chest, elbows, hands, belly, knees or ashtangana (sound familiar fellow yogis?).  They prayed first to Ganesha to remove any obstacles, especially if the ceremony was performed incorrectly at any point, then they prayed for the new school year, for the health and well-being of the staff, for the strength of the school and its mission, and most importantly prayed to show gratitude to Lord Vishnu, Supreme Being, Preserver and Maintainer of Life (Now really, do I know this is what they prayed? No. I couldn’t hear them above the din of clanging cymbals, and if I could, I wouldn’t understand as the prayers were in Hindi. But this is the typical type of prayer during this specific puja, and so it was explained to me).

Throughout the singing, the priest handed Aditya and Disha betel leaves and clumps of marigolds which they held to their lips, then placed in a pile on the shrine. The smoke from smouldering leaves and burning incense slowly filled the room, the haze clouding the upper layer of air, the scent drifting over and purifying us. After a half an hour or so, we suddenly stood up, and all the Indians in the room began singing what I can only now assume to be the aarti, or closing hymn, for Vishnu. We all clapped on and off beat, the erratic rhythm unnatural to my ear. A small, stooped old women sat on a bench in the front, tapping our her own cadence, while more bright orange and yellow marigolds and verdant betel leaves were passed out to all in attendance. Clutching them in my hands, unsure of what was happening, I whispered my own prayers of thanks, ritualistically starting in on an Our Father which morphed part way into Metta paramita of loving-kindness, religious practices swirling in the room like the camphorous smoke being brought around and “taken” with cupped hands by the Indian staff. I, too, wanted to reach out, to smudge myself like we do in the southwest with sage and sweetgrass, but I wasn’t offered the tray and wasn’t confident enough to seek it out myself. Besides, any faith but in the goodness of human nature and an expanding, unpredictable universe has seemed beyond my grasp as of late (and maybe that’s okay, na, Pastor Don?).

As suddenly as it started, the singing stopped, the clapping tapered off, and small bowls of rava sheera prasad (a sweet, rich dish of cracked wheat, coconut and banana made as an offering –prasada– to a god) were passed out and shared, eaten with our hands which were made greasy by the ghee, sticky from the sugar. Cups of tea, now cold, were collected from the floor and slowly we made our way out of the puja, in the the fresh, wet, monsoon air. In an orderly jumble, we stepped into our shoes, brushed off our pants and skirts and saris, eager for the lunch that had been prepared for us to eat as one big family. School would start five days later. There was still much to do before the end of this last week of “vacation,” but no one was willing to pass up a delicious post-puja meal of puri chole, salad and more sweets than anyone needed. So we headed up to the second floor, some by lift, others by stair, thirty-plus individuals fused together in this school, this city, this state country world, building our dreams together and hoping silently that, like Lord Vishnu, we may not be limited by space or time or material things, that we may find ourselves hours, days, and years from now settled and unfettered, aware of our connection to everything, grateful for the good life before us.

May all beings be happy and healthy,

May all beings be safe and free,

May all beings take care of themselves with ease.